On top of the current sale process for Lafarge’s gypsum business in Australia, Lafarge has launched the sale of its European gypsum business in a move that could raise at least €1bn ($1.45bn) as the indebted cement group tries to slash its €16bn debt burden through asset disposals.

The Financial Times article went on to cite people familiar with the matter, who said buyout groups Advent and Kohlberg Kravis Roberts (KKR) are among the groups interested in buying Lafarge’s European gypsum business. The paper did not attribute their claims.

Lafarge might also add its eastern European business to the assets for sale, the Financial Times article added. The report suggested that Boral, Lafarge’s joint venture partner for its Asian gypsum arm, might buy out the French group’s 50% stake in that business.

In January 2011, Bloomberg reported the company’s strategic focus was cement and emerging markets. It also mentioned the proposed sale timing could be effected by the performance of the North American operations, who posted €33 million loss in the first nine months of 2010. 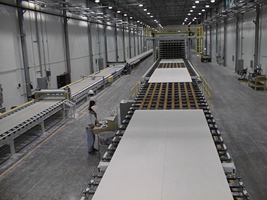